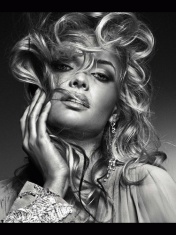 Tatiana Kotova was born on September 3, 1985 in a small but friendly provincial family. As a child, her father taught her boxing so that she could stand up for herself.

The girl began to participate in beauty contests even at school. And here she is, her first victory, the first small step towards future major achievements: Tatiana received two titles: “Miss Autumn 98” and “Miss Charm”.

Kotova's studies were easy, without any problems. The girl was in her third year of economics at Rostov University when she was noticed by the head of the Image-Elite modeling agency. Tatiana was invited to attend the master class. Kotova was told that if she studied a little, she would become the second Naomi Campbell. The words of the master sunk into the soul of the young beauty, and she began to diligently study at the school of models, go to the catwalk.

A few months later, Tatiana Kotova was offered to take part in the competition "The Best Model of the South of Russia", where she entered the top five finalists. Of course, the most important event in Tatiana's life is her participation and victory in the Miss Russia 2006 contest. Then there was participation in the contests "Miss Universe" and "Miss World".


Since March 2008, Tatiana Kotova is officially the soloist of the Ukrainian-Russian group VIA Gra.

In early January 2009, the legendary first soloist of the group, Nadezhda Granovskaya, returned to the collective and the group appeared in the updated trio Nadezhda - Albina - Tatiana. During 2009, with the participation of Tatyana, two mega hits, Anti-Geisha and Crazy, were recorded, and the group shoots clips on them, directed by Alan Badoev and Sergey Solodky.

In early March 2010, information began to appear in the press that Tatyana Kotova would soon leave the group. The reason for leaving is Tatiana's pregnancy. But this is not the case. On March 21, 2010, as expected, Tatyana Kotova's last performance as part of the group took place at the Ukrainian “Star Factory. Superfinal ". On April 22, 2010, a press conference was held with the participation of two compositions and the producers of the collective, where Tatyana officially announced her departure.

Tatiana's debut solo work is the song "On", written by Irina Dubtsova. On April 18, 2012, the premiere of the song "In the Games of Nights" and the video for it took place. The new video was presented under the creative pseudonym KOTTOVA due to the fact that Tatiana signed a contract with the Imperia Muzyki production center, which is being worked on under this label.