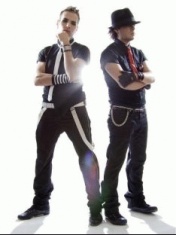 
Whether due to general globalization, or due to the arrival of transnational major labels on the Eastern European market, international stars began to be born in this region little by little. Tatu and Alsou, with variable, but still success, flashing in the European charts, were far from the only ones. Especially in this respect, the Romanians distinguished themselves. If the success of O-Zone was more likely in the category of "radio boo-ha-ha", then the presence of the singer Inna (Inna) and the group Morandi in the dance charts already has to be taken seriously.

The Morandi duo, although formally considered the second most successful Romanian project after O-Zone, has an undeniable advantage in that they managed not to shoot one or two singles, but to make their success lasting. Yes, of course Morandi is not one of those bands that regularly appear in the British or, even more so, American charts. Their zone of influence is the Czech Republic, Slovakia, Czech Republic, Poland, Macedonia, and of course Russia and Ukraine. But there they feel very confident, in the last two or three years, almost every single of theirs gets a place in the top three. According to the statistics of the tophit.ru resource, two of their songs, "Angels" and "Colors", reached the first place in Russia, and the single "Save Me" stopped at the second.

The name Morandi hides Marius Moga, aka simply Moga and Andrei Stefan Ropchea, nicknamed Randi. The band's name has nothing to do with Gianni Morandi or Italy in general. The guys simply made a beautiful word from two halves of their names - Morandi is Moga plus Randi.

Nicknamed "Little Mozart," Moga quickly became known as an excellent pop songwriter. At the beginning of the 2000s, when Marius was barely twenty, he already worked in full with almost a dozen Romanian pop groups. In 2005, Moga decided to finally found his own group, in which he recruited his friend Randy for the role of the frontman. The success came almost instantly: the second single "Beijo", a sentimental dancer with a gypsy flavor, not only reached the top of the national charts, but also flashed in the charts of Russia and Slovakia. The duo were even nominated for the MTV Europe Music Awards as the best group in Romania, but the award went to others.

Feeling a gold mine, the guys hastily recorded an English version of "Beijo", but did not have much success with it. At home, Morandi, as they say, bathed in luxury - two albums sold out with a bang, and the concerts were sold out. Having assembled a magnificent cast with singers and dancers, Moga took the role of a gray cardinal and appeared at the performances of his brainchild only from time to time, having outsourced the "ches".

In 2007, the group was signed by the Romanian Universal and the result was not long in coming. The English-language album "N3XT" swept across eastern Europe in a victorious march, while the single "Angels" collected five first places. The secret of the Romanians' success was that, on the one hand, they successfully recorded a fashionable electro house according to the precepts of the same David Guetta, on the other hand, they filled their tracks with lyricism and passion worthy of Latin American macho. Morandi's tracks sounded like Guetta suddenly decided to invite not Kelly Rowland and JD Davis to sing, but Ricky Martin with Enrique Iglesias.

It seems that if the guys finally decide to sing in Spanish, they will have a whole continent at their feet, because according to their emotions, their creations are somewhere near the "Slave of Izaura" or the rich who are also crying. In the meantime, Moga and Randy are successfully mastering the grain fields of the countries of the former Warsaw bloc. The fourth album “Colors” is successfully storming the charts.