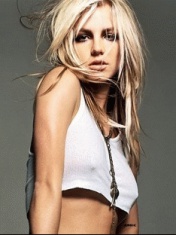 
From early childhood, Britney was preparing to become a star, in which her parents actively helped her. In 1993, the girl was cast on the Disney channel and for 2 years she participated in the Mickey Mouse Club show. In parallel, Britney played in the musical "Ruthless!" as Brit, a little girl who so wanted to become a star that she was ready to literally kill everyone who stood in her way.She sang for a while in the girl group Innosense, but soon, deciding to start a solo career, she recorded a demo disc, which ended up in the hands of Jive Records producers who signed with her, followed by a tour of the country, performances in supermarkets and support for 'N Sync and the Backstreet Boys.

Her debut album "... Baby One More Time" made Britney worldwide popular, and the single of the same name topped the Billboard Hot 100 charts. The culmination of her success was the MTV Europe Music Awards in Dublin, where Britney won four nominations at once.

Spears' second LP "Oops! ... I Did It Again" was released in the spring of 2000 and cemented her status as a pop star: 10 platinum certificates in the USA, 17 million copies sold. Her third album "Britney" was released in the fall of 2001, to work on the disc and singles "I'm Slave 4 U" and "Boys" Britney attracted the famous producer The Neptunes, as well as Justin Timberlake, with whom she was just having an affair. But the very next year Britney broke up with Timberlake.

Album "In The Zone", released in the fall of 2003, once again took Britney to the charts. For the single "Toxic", Spears won her first Grammy.

On Christmas Day 2003-2004, the singer popped out to marry childhood friend Jason Alexander. Their marriage lasted two days, after which the enterprising Alexander for $ 1 million agreed to give Britney a divorce. Less than a year later, Britney got married again - this time with Kevin Federline. On September 14, 2005, Britney gave birth to a boy, calling him Sean Preston, and on September 12, 2006, her second son, Jadon James. However, the singer's family life was, according to her own confessions, unhappy from the very beginning, and in November 2006 the star filed for divorce. And then she plunged into a crazy party life and soon ended up in a rehabilitation clinic.

After a hiatus in Spears' career in October 2007, the album "Blackout" was released, his first single "Gimme More" was first presented at the MTV Video Music Awards on August 31, 2007. This performance was most expected. Unfortunately, however, critics considered it a complete failure. Nevertheless, the total score was not bad: for the song "Piece Of Me" Britney won three awards - for best pop song, best female video and video of 2007.

04:30
1
From The Bottom Of My Broken Heart
Из глубины моего разбитого сердца

03:51
Don't Let Me Be The Last To Know
Не позволяй мне узнать последней

The beat goes on (live)

The way you make me feel