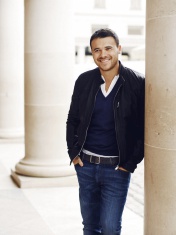 EMIN is a famous singer and musician, a rising star in Great Britain, where in May 2012 his second international album "After The Thunder" was released, a special guest of the most famous music contest "Eurovision-2012".

Emin was born in Baku, Azerbaijan, then when he was three years old, his family moved to Moscow. As a teenager, Emin went to study in Europe, which, in his words, should have "opened his mind to the world." He completed his education in New Jersey, USA, where not only did he discover entrepreneurial abilities, but also a love for music that has never disappeared.

“Music has always played in our house, for example, songs by Muslim Magomayev, Tom Jones, Engelbert Humperdinck, Aretha Franklin. Mom gave me a couple of young Elvis songbooks that inspired me. I admired singers with strong voices and really wanted to sing like Elvis! "

Emin once believed that his calling was to be an entrepreneur. As a student, before returning to Russia, he created an online store and opened a shoe boutique in Manhattan in order to have a successful portfolio in fashion and retail. Despite significant achievements in business, there was still something missing in Emin's life. Six years ago, he decided to follow the dictates of his heart.

“No matter what I did in my life, I always dreamed of becoming a singer,” he explains. - Everything has always been tied to music. I thought that if I don't do it now, then at 40 I will realize it and I will regret not even trying. "

The result was their debut album Still in 2006, which was an immediate success. This was followed by 3 new albums: "Incredible" (2007), "Obsession" (2008) and "Devotion" (2009). The ambition and focus that formed the foundation of his commercial career influenced his next step.

“I wanted to do something bigger and my friends and management in the UK helped me find the right direction.”

That direction was a collaboration with London-based producer Brian Rowling and his world-class writing team at Metrophoni Studios. Working with Rowling prompted Emin to develop his vocal talent while simultaneously improving as a songwriter and composer and opening up a new range of songwriting possibilities.

As a result, Emin was nominated for the 2011 Grammy Award for Best New Artist, which earned him the attention of the leading record company EMI, making him his artist.

Thanks to renewed collaboration with Brian Rowling and songwriters of the first international album, Wonder, as well as working with new people and developing his own writing skills, Emin's new album After The Thunder (2012) is mature, sincere and confident.

Released in May, After The Thunder features a confident singer whose charm and personality are evident in every song on an album that is the result of a lifelong passion.