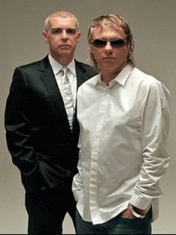 
The duo Pet Shop Boys have miraculously managed to remain relevant and loved by the public for twenty-five years in a row. None of their ten studio albums missed the top ten on the UK charts. Pet Shop Boys have always served as a model for a kind of pop music for intellectuals: restrained and sophisticated electronic arrangements, excellent songwriting, Neil Tennant's melancholic voice and ironic lyrics, often touching on social topics. Both members of the duo are gay, and although Chris and Neil began to talk about it openly only in the mid-nineties, their songs always had a liberal message. They had time to go to Catholic schools (It's A Sin) and give a second life to the old gay anthem (Go West).

Their career began with the success of the song "It's A Sin", which has since become the pop standard in Britain, performed by both the East 17 boy band and the hipster We Have Band. To shoot the video "Go West" in 1993, the group came to Russia and since then always willingly performs in Moscow, despite the cancellation of the concert, which fell on the day of elections to the State Duma, or the fact that it was in Moscow that he died in a car accident. group administrator. "Go West" is far from the only cover version in PSB's repertoire: Chris and Neal have successfully covered "Always On My Mind", performed by Elvis Presley, and even "Where The Streets Have No Name" by U2. The Shops were also noted as producers: in 1989, Tennant and Lowe worked on the album of the famous Hollywood actress and singer Lisa Minelli. PSB became famous as the authors of remixes: Blur, Killers, Rammstein and even Madonna gave their tracks to them for processing, including the Pet Shop Boys' remix of the song "Sorry" in the concert tour program for the album "Confessions on the Dancefloor".

BRIT Award
1987 - Best British Single
1988 - Best British Group
2009 - Outstanding Contribution to Music
Pet Shop Boys have been nominated for a Grammy five times, but they have not yet received a single statuette.

04:19
В избранное Новый плейлист
Клип Pet Shop Boys - I Don't Know What You Want But I Can't Give It Anymore

04:39
I Wouldn't Normally Do This Kind Of Thing