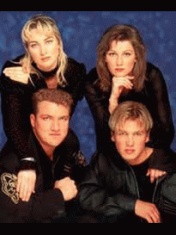 In 1994, Ace of Base already had 6 World Music Awards, several Grammy nominations in different countries, 3 Billboard Awards. In addition, Billboard calculated that the Swedish group Ace оf Base became the most popular non-American group in the 20th century.

Interestingly, in their native Sweden, “The Sign” was voted the worst album of the year.

By the beginning of 1995, Ace of Base continued to lead the music charts in many countries. But the band members admit that they are tired of the endless comparison of Ace of Base with the equally popular ABBA.

In 1995 the band released a new album "The Bridge", which turned out to be more lyrical than the previous ones. The album was certified platinum, but did not repeat the phenomenal success of the group's first album.

In 1998, Ace of Base released their new long-awaited album called "Flowers".

The song from the third album "Life Is A Flower" was received with enthusiasm in Europe and was named the most played song on the radio. The single sold 250,000 copies throughout the UK, ranking 5th in sales.

In America, a new record of the Swedes was released under the name "Cruel Summer". The song hit the top ten for the first time in 4 years. These two versions differed in track lists and even lyrics.

In September 2002, Ace of Base released their new fourth album "Da Capo" in Europe and Japan. The album entered many European charts, but was not as popular as the band's previous albums.

On December 12, 2009, it was confirmed that Ace of Base will release a new album in 2010 with a renewed line-up, and two new soloists will be invited to replace the band's retired members, Jenny and Lynn.

At the end of June 2010, the group's official Facebook page was opened. It featured a photo of the band with new soloists who were introduced to the community like Clara and Julia.

On July 16, 2010 the band will present their first single "All For You" from their forthcoming studio album on European radio stations.

In the autumn of the same year, the first album of the new group Ace.of.Base was released. called "The Golden Ratio".

The largest number of clips for the group were directed by directors Matt Broadley and Richard Haslop, the latter is known for his work with Queen, The Cure and New Order, as well as films and programs for the BBC channel. The second most important clipmakers of Ace of Base are Daniel Boriesson and Nigel Dick, known for his work with Britney Spears, Nickelback, Guns N 'Roses, Backstreet Boys.

18. Always Have Always Will

Музыкальные клипы Ace Of Base

03:12
Living In Danger from the album “Happy Nation - US-version”