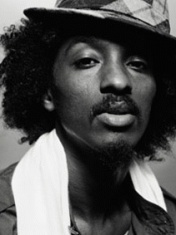 Poet, rapper and musician K'Naan was born on February 1, 1978 into a creative family in the capital of Somalia - Mogadishu. His childhood was difficult because of the war in his homeland. But even then he finds solace in hip-hop music. Keinan moved to Canada with his parents as a teenager. His fascination with rap becomes more and more passionate, and eventually he drops out of school to devote all his time to music.

He made his debut performance at a concert in front of the Office of the United Nations High Commissioner for Refugees in 1999. He spoke uncensored about their failed mission in Somalia, which impressed the singer Yussa N'Dour. This acquaintance opens up new opportunities for the musician. In 2001, Kanan recorded his debut album The Dusty Foot Philosopher, which was released only in 2005 and brought the performer popularity.

At the beginning of 2009 the second studio album "Troubadour" was released.

On March 21, 2010 K'Naan visited Moscow, where he performed several versions of the song “Wavin 'Flag” on Vasilievsky Spusk, and also talked with Russian hip-hop musicians and fans. It was this composition that was chosen as the advertising anthem for the 2010 FIFA World Cup, which took place in South Africa.

In 2012, the rapper released a new album - More Beautiful Than Silence.

05:17
В избранное Новый плейлист
2
Клип K'NAAN - Is Anybody Out There?