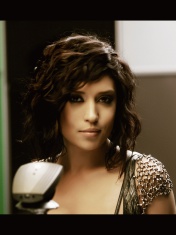 Alena Vinnitskaya is an ex-member of the VIA Gra group in the period from September 2000 to January 2003 (the very first composition of the group in a duet with Nadezhda Granovskaya). From 1997 to 2000, Alena worked as a VJ on music TV channels, as a DJ at a radio station.
In 2003, she began her solo career, the first solo work of the singer was the song "Let's Forget Everything", for which a video clip was filmed. Today Alena has 8 albums and is a successful singer in Ukraine.
In 2013, Alena Vinnitskaya participated as a star coach in the project "I Want V VIA Gro", her team reached the final.