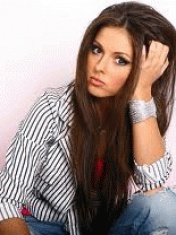 Nyusha (at birth - Anna Vladimirovna Shurochkina) was born on August 15, 1990 in a family of professional musicians. Nyusha's father is a former member of the popular musical group "Laskovy May" Vladimir Shurochkin.
In 2008 Nyusha became a finalist of the international competition "New Wave 2008", where she took eighth place.
In 2009, the singer's first single "Howl to the Moon" was released.
In 2010, the singer's new single "Don't interrupt" is released. The song instantly became the most popular Russian-language hit in April 2010.
Nyusha was also nominated for the MuzTV-2010 award in the Breakthrough of the Year nomination.
In September 2010, the singer signed a contract with the label "Gala Records". In the same period, the singer's third single "Miracle" ("Choose a miracle") reached the 1st place on the Russian radio chart and debuted at the 7th line of the digital singles chart. Soon there was information about the imminent release of the performer's debut album. The album is titled "Choose a Miracle" and was released in regular and deluxe versions.
In 2011, Nyusha released three new singles: "It Hurts", Higher "and" Plus Près (We Can Make it Right) ".
In 2012, Nyusha became a TV presenter on the MUZ TV channel, where, together with Mitya Fomin, she hosts the HitChart program.
Смотреть все