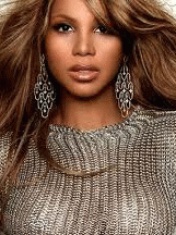 Toni Michelle Braxton is an American rhythm and blues, pop and soul singer, songwriter and actress. She is known for such hits as "Un-Break My Heart", "Breathe Again", "You're Makin 'Me High", "He Wasn't Man Enough" and others. Winner of 6 Grammy awards.

Tony and her four younger sisters began performing as The Braxtons in the late 1980s. Their first single, "Good Life", was released in 1990, and although it was not successful, it attracted the attention of producers and musicians Antonio "LA" Reid and Kenneth "Babyface".

In June 1993, Tony released his debut album, Toni Braxton, which peaked at # 1 on the US Billboard 200, and his first single, “Another Sad Love Song,” reached # 7 and # 2 on the Billboard Hot 100 and R&B Singles, respectively. Braxton's debut album has won several prestigious awards, including three Grammy Awards

In 1996, Braxton released his second and most commercially successful album, Secrets. Thanks to "You're Makin 'Me High," the first single from the album, to # 1 on the Hot 100 for Braxton, the album reached number two on the Billboard 200.

The second single from the album, Un-Break My Heart, written by Diane Warren and later signed to Tony, became the most successful of her career, spending eleven weeks at number one on the Hot 100 and topping the Hot Dance Singles Sales chart for as many. Hot Dance Music / Club Play chart for four weeks. The single also peaked at number two on the UK national chart.

On April 25, 2000, Braxton's new album, The Heat, debuted at number two on Billboard 200 Albums, which remained in the top twenty for fifteen consecutive weeks. "The Heat" has been certified double platinum by the RIAA.

Tony's fourth studio album, More Than a Woman, was being prepared for release while Braxton was pregnant with her second child and was released in November 2002 without proper publicity. the singer was going through a difficult pregnancy in bed.

In April 2005, the single "Please" was released - the first composition from Braxton's future album "Libra".

"Libra" will debut at number four on the Billboard 200 Albums with 114,593 copies sold in its first week. The album also peaked at number two on the Billboard Top R & B / Hip-Hop Albums. At the end of 2005, the album received gold status and by that time had sold 431 thousand copies.

Meanwhile, Toni Braxton recorded a duet with Il Divo's "The Time of Our Lives". The song became the official anthem of the 2006 FIFA World Cup and was performed at the opening of the championship in Berlin on June 9th.

In August 2008, Braxton was confirmed to participate in the seventh season of the television dance show Dancing with the Stars, in which she had participated until October 21st.

On September 11, 2009 on the Essence magazine's website the premiere of the first official single “Yesterday” from the singer's forthcoming album “Pulse”, which was released on May 4, 2010, took place.

On January 29, 2010, Braxton's official website published two more songs from the upcoming album - "Hands Tied" and "Make My Heart", video clips for which were filmed by director Billy Woodruff, who previously shot the video for her hits "Un-Break My Heart" 1996) and "He Wasn't Man Enough" (2000). The clips premiered in mid-April.

The single "Yesterday" peaked at # 12 on the Billboard Hot R & B / Hip-Hop Songs chart.