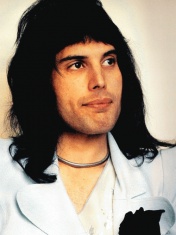 Freddie Mercury was born on September 5, 1946 on the island of Zanzibar. His parents were Parsis. The name Freddie stuck with the boy when he started attending St. Peter's School. At school age, Freddie Mercury was fond of tennis, all-around. He studied well, studied painting and music. During his studies at school he graduated from piano courses. And in 1958, Freddie Mercury, together with his friends, organized the group "The Hectics", which played at school parties.

In 1962, Freddie returned to Zanzibar, but soon his family moved to England. There he began to study at the polytechnic school, but he was intensively engaged in painting and graphics. In his spare time he worked as a loader, because his family was not rich. After graduating from high school, Mercury entered Ealing Art College in London, where he studied graphic illustration. Freddie stopped living with his parents, having rented an apartment for himself. Soon an important event happened in the life of Fredy Mercury - he met the leader of the "Smile" group. Then he began to attend rehearsals of the group, got to know Brian May, Roger Taylor better. After graduating from art college, Mercury, together with Taylor, opened their own shop.


In August 1969, Mercury met with the musicians of the Ibex group (later renamed Wreckage), and soon began performing with them. But the group did not last long, and Mercury joined a new collective - "Sour Milk Sea". However, the union of musicians did not last long.


In 1970, he returned to "Smile". The band soon changed their name to Queen. After a long search and several candidates, John Deacon took the place of the guitarist.


In 1972, the group's first album was released. Mercury became the author of several of Queen's first hits: Bohemian Rhapsody, Killer Queen. The group became famous all over the world, tours began in different countries.


In 1979, Freddie Mercury performed with the British Royal Ballet.


In 1980, Freddie even changed his image, began to wear a mustache and cut his hair short. Taking advantage of the vacation and the suspension of touring activities, Mercury took up solo work. He first released the song "Love Kills" (1984). And in 1985 the album “Mr. Bad Guy ". Co-creation with Montserrat Caballe resulted in several joint performances at various festivals.


Since 1986, rumors have appeared in the press about the singer's illness, which he completely denied. Only the closest knew about his AIDS disease.


In 1989, the Queen gave up the tour. Freddie Mercury devoted this period in his life to recording songs, because he wanted to release as much as possible. The solo album Barcelona was followed by The Miracle and Innuendo.


On November 23, 1991, Mercury officially confirmed that he was sick with AIDS, and the next day he died of bronchial pneumonia.

To this day, Freddie Mercury remains one of the most famous and popular singers worldwide. In his honor, a concert was given in 1992, at which many stars and friends of the performer performed.

03:46
Living On My Own
Жизнь в одиночестве