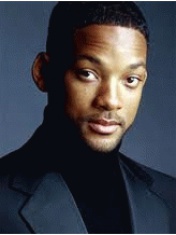 Will Smith was born on September 25, 1968 in Philadelphia, Pennsylvania, USA. The young artist grew up in the family of a school teacher and engineer. His parents divorced when he was 13 years old.

In Philadelphia, he met musician Jeff Townes, and soon became widely known with him in the late 1980s as a member of the hip-hop duo DJ Jazzy Jeff & the Fresh Prince, who won the first Grammy for Best Rap Performance.

Between 1990 and 1998, Smith starred in The Fresh Prince of Bel-Air, the action movie Bad Boys, the blockbusters Independence Day and Men in Black.

Will Smith turned down the lead role in The Matrix to star in the cowboy comedy Wild Wild West, but the film flopped miserably.

In the early 2000s, Smith focuses on more serious film work. And for the role of Muhammad Ali in 2001 he was nominated for an Oscar; the second nomination goes to him in 2006.

In 2002 - 2003 he starred in the sequels Men in Black 2 and Bad Boys 2. In 2005, the comedy "Rules for Filming: The Hitch Method" was released, which captivated the audience. In the following years, Will took part in such films as "I'm a Robot" and "The Pursuit of Happyness." In May 2012, the movie "Men in Black 3" was released. In 2013, M. Night Shyamalan's new film "After the Earth" will be released, where Will Smith and his son Jaden will play the main roles. By the beginning of the second decade of the 21st century, Will Smith continues to be one of the most sought-after Hollywood actors.

Already in 2009, the singer's discography includes 14 studio albums. Will Smith, in parallel with filming in films, continues to develop in the musical direction.