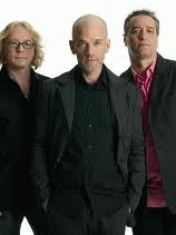 REM is an American rock group founded in 1980. One of the main bands that influenced the development of alternative rock. The band's direction is a mixture of post-punk and folk-rock with indie rock. The name is the medical abbreviation for Rapid Eye Movement.

The first single "Radio Free Europe" was released in 1981, and in 1983 the band released their first album, "Murmur", which received positive reviews from music critics and listeners.

After a long tour, the band released the album "Green" in 1988 and began to raise political and environmental issues in their songs.

The most commercially successful albums are "Out of Time", released in 1991, and "Automatic for the People" in 1992.

Monster, released in 1994, brings the band back to a more rock oriented sound.

In total, the group recorded 16 albums and existed for 31 years. At the end of 2011, the compilation Part Lies, Part Heart, Part Truth, Part Garbage 1982–2011 was released with all the hits of the band.