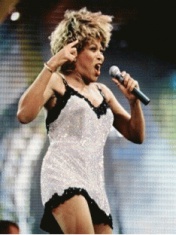 The musical career for the daughter of working parents, Anna May, began in St. Louis, where in one of the nightclubs she met bluesman Ike Turner and asked to join him to sing along. When Ike was recording the single A Fool In Love in 1960 and his singer did not appear, Anna sang for her, and the song became a major hit in the United States. Shortly thereafter, Ike Turner married Anna and proposed her stage name Tina - and so Tina Turner, vocalist of The Ike & Tina Turner Revue, appeared. The group was a great success, considering that Tina began to develop her stage talents and soon became one of the most impressive women on stage in the 1960s. Ike and Tina released the hit River Deep, Mountain High, covered Proud Mary, the Creedence Clearwater Revival song, and earned a Grammy for Best R&B Performance.

Despite this success, Aiku (who was also the group's manager) found it difficult to keep up with the popularity wave of the other 60s stars. Ike and Tina's numbered albums were less popular, there was not enough money. Tina tried to start a solo career - Ike produced her first album Tina Turns the Country On (1974), but in 1976 Tina decided to leave her husband and for the next two years hid from the enraged Ike through friends. The divorce finally took place in 1978, and Tina Turner had to pursue a career on her own.

Her first major hit in 1984 was Let's Stay Together, followed by What's Love Got to Do with It, which climbed to # 1 on the US Billboard Chart. Despite her age, Tina (she was 44 at the time) again became a super popular artist - in the same year her hit album Private Dancer was released (the song of the same name was written for Tina by Mark Knopfler. tour of 170 concerts and a Grammy award.

In the second half of the 80s and almost all of the 90s, Tina firmly established herself at the top of the music industry, releasing albums, participating in the work on a biopic about her life with Ike Turner (the soundtrack for the film went platinum in America), recording the main theme for the film about James Bond Golden Eye, and so on. In 2000, the Guinness World Records Committee announced that Tina Turner became the solo artist whose concerts have sold the most tickets in the history of pop music. After 2000, Tina took a break from her performances to return with an anniversary (50 years of concert activity!) Tour in 2008 - these concerts were, again, one of the most attended in the 2008-2009 season.

05:01
I Heard It Through The Grapevine