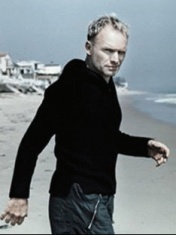 The musician was born on October 2, 1951 in the port town of Wallsend in the north of England.

Ernest's father Matthew Sumner worked for many years as a fitter at a local engineering company. He later bought a small dairy shop. As a child, Sting helped his father deliver milk in the morning.

Audrey's mother worked as a hairdresser and nurse. She had a classical music education and was able to develop her son's natural abilities by teaching him to play the piano at home. Gordon was the eldest of four children in the family. He also has younger sisters Anita, Angela and brother Philip.

In 1977 drummer Stuart Copeland, guitarist Andy Summers and Sting formed The Police. The first two singles, "Fall Out" and "Roxanne", were unsuccessful until they were heard by entrepreneur Miles Copeland (Stewart's older brother). Released in April 1979, "Roxanne" rose to number 12 in Britain and became a European hit. The first success was followed by the albums "Reggatta de Blanc", "Zenyattà Mondatta", "Ghost in the Machine" and "Synchronicity" (with the mega-hit "Every Breath You Take"). After a triumphant world tour in 1984, Sting decided that he had achieved everything he could with the group, and the group disbanded at the peak of its popularity.

Sting's independent career was no less successful. His first album with jazz elements, The Dream of the Blue Turtles, went platinum. The single from this album was the song “Russians”.

In 1987, after a tour with The Dream of the Blue Turtles, Sting recorded an album ... Nothing Like the Sun / The song "They Dance Alone (Cueca Solo)" was especially popular. The Soul Cages (1991), which coincided with the loss of his parents, and Ten Summoner's Tales (1993) introduced Sting as a mature composer.

In 1991 Sting released the autobiographical album The Soul Cages, from which the single "All This Time" took the fifth place in the top 100 of the Billboard magazine. He continues in that vein with Ten Summoner's Tales, which includes hits like If I Ever Lose My Faith in You and Fields of Gold. Mercury Falling was not as successful as Ten Summoner's Tales, but The title track from his new album Brand New Day proved that Sting is still capable of producing hits.

The events of September 11, 2001, deeply affected Sting. Recorded in the first half of 2003 in Paris, the album "Sacred Love" bears a clear imprint of the events in the world at that time. Sting's lyrics touch upon the themes of war, religion, understanding and misunderstanding, but the main theme, as the album title suggests, was still love. The song "Send Your Love" from this album brought Sting another Grammy nomination.

At the end of May 2013, Sting's official website announced the recording of the new album The Last Ship, which was released on September 24 of the same year [3]. This disc became the musician's first studio album in the last ten years.

04:04
If You Love Somebody Set Them Free