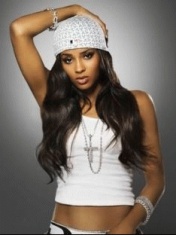 Ciara is one of the most award-winning young pop stars of today. Her debut on the music scene was truly overwhelming - the album "Goodies" - instantly topped the Billboard charts, and soared to the top of the charts in the UK, USA and Canada. However, in addition to her solo work, Ciara actively collaborated with other musicians: she took part in the tours of Gven Stefani and Chris Brown, and her joint video with Missy Elliot for the song "Lose Control" was even awarded a Grammy.

The successful debut did not stop the ambitious singer, but she was in no hurry to repeat the success - the next disc, "Ciara: The Evolution", was released only two years after the debut album. Ciara's songs have changed a little - they have become a little more carefully produced, and the main hit of the record - "Get Up" - became the title song for the film "Step Up", which replaced "Dirty Dancing" in the hearts of dancefloors. It is not surprising that Ciara's second album was also expected to be a commercial success: the disc's circulation exceeded two million copies, and the tops of the North American charts were naturally conquered.

The third album "Fantasy Ride", released in 2008, also contained a number of surprises, in particular, the duet with Justin Timberlake "Love Sex Magic", which was nominated for a Grammy, but the prize, unfortunately , not received. Although not as commercially successful as its two predecessors, Ciara's third album sold well and peaked at number three on the Billboard charts.

The singer continues to actively collaborate with her pop-music colleague: she took part in Britney Spears' concerts as part of the tour in support of her album "Circus", and also went on a joint tour with rapper Jay-Z. In addition, Ciara and Justin Timberlake have crossed the threshold of the studio again together - their duo will appear on Ciara's new, fourth studio album, which is scheduled for release in 2010.