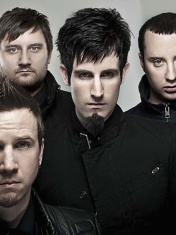 Pendulum appeared in the Australian city of Perth, and in 2003 released their first track “Vault. After releasing several singles, in 2005 Pendulum released their debut album, Hold Your Color. The album sold 225,000 copies in the UK and peaked at # 29 on the UK Albums Chart. The cover art for it was created by Vince Piersman.

The album was re-released in 2007 and had a different track list. The last two songs, "Another Planet" and "Still Gray", were replaced by "Blood Sugar" and "Axle Grinder". The band's second studio album, In Silico, was released in May 2008. It marked the band's departure from the drum'n'bass style, as well as the incorporation of elements of rock music. The second single from the album "Propane Nightmares" reached # 9 on the UK Singles Chart. In 2008, Pendulum performed at numerous European music festivals in support of the album, and also held their first tour in North America. On December 4-5, the band performed at London's Brixton Academy, and based on it, the live album Live at Brixton Academy was released, released in June 2009. In December 2009 the band performed in Europe. During this tour, it was announced that they were working on their third album, Immersion. The release took place on May 24, 2010.

On January 22, 2010, a preview of the Immersion album took place at the Ear Storm nightclub in London, and additional materials were posted on the official website. The song "Salt In The Wounds" became a Hot Entry on Zane Lowe's BBC Radio 1 program, but it was not an official single. In the program it was announced that the first single from the album would be the composition "Watercolor". It first aired on March 8, 2010 on Zane Lowe's program, and became the Single of the Week. The video premiered on March 31st on the band's MySpace page. On April 1, the video for the song "Salt In The Wounds" was released. "Watercolor" reached # 4 on the UK Singles Chart.

The band released a deluxe edition of Immersion on iTunes this month, which, in addition to 15 songs from the regular version, contained remixes of "Watercolor", "Witchcraft" and "The Island". Videos for these singles have been added to the publication in the UK and USA.