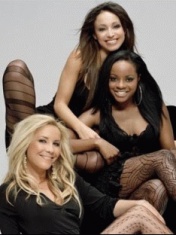 A female pop trio from London (UK), which was formed in 1998. The group has released 27 singles, six of which went on to become # 1 in the UK, and seven albums, two of which also climbed to the top of the UK Albums Chart. The girls' three albums went triple platinum. In 2003, they won the Best Dance Artist nomination, and in 2006, they were named 21st Century Performers in the UK, ahead of artists such as Britney Spears and Madonna. Over six million copies of Sugababes albums have been purchased worldwide.