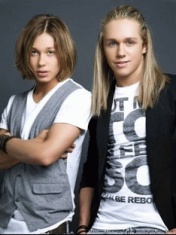 
The BiS group belongs to that happy minority of Star Factory graduates who, after the end of the television phase of the project, remained under the tutelage of a kind producer. Bikbaev and Sokolovsky met in 2007 at the seventh (and to date, the last) "Factory" under the strict guidance of Konstantin Meladze, who, to the delight of the teenagers, decided to combine two pretty blondes together. Vlad Sokolovsky had such a career from birth: he is the son of Andrei Sokolovsky, the leader of the little-known boy band "IKS-Mission", the abbreviation of which stands for "Art. Culture. Sport". Dima Bikbaev made his way on his own - at the age of 15 he moved from Ussuriisk to conquer the capital and on the way to the "Factory" he managed to work in the theater of the Moon.

The creative history of "BiSa" is reduced to a single album and several hits, which became such thanks to the active rotation. Like almost all "successful" graduates of "Star Factories", they owe their achievements primarily to the producer - in their case, he is also a songwriter, Konstantin Meladze. Since it is physically difficult to maintain several projects, Meladze is not the only composer who writes for "BiS". The guys also sing songs by Mark Tishman, as well as their own works. But they are still included in the albums, as they say, for the kit. However, for the fans of the duet, the authorship of hits is not a primary problem.

Dmitry Bikbaev, who used to answer when questioning that he wants to become a film director, recently wrote a book of philosophical short stories and short stories entitled “Ya. Meaning. Love".