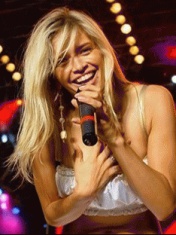 It sometimes happens that a simple girl from an ordinary Kiev family becomes a real star: of course, for such things, great appearance is one of the main, but by no means the only factor of success. You also need talent and willpower.

Vera Brezhneva came to show business largely due to her spectacular appearance: when the VIA Gra group was looking for a replacement for the departed Alena Vinnitskaya, the beautiful Vera instantly won the hearts of first producers, and then the audience. Tall, slender - Vera became the object of worship of fans and, perhaps, it was because of this that she lasted longer in the group than the other members. The fans even began to call the records of the group with the participation of Vera "records of the golden composition."

But all good things come to an end someday, and in 2007 Vera leaves the group to take up solo work. The beauty is expected not only in music studios, but also on television: she is a frequent guest and host of a number of TV shows, but at the same time Vera did not forget about her musical creativity, having recorded two solo albums - "I Don't Play" and "Nirvana".

A new round of Brezhneva's career began in 2008, when she was invited to star in the romantic comedy Love in the City. Vera played not only one of the main roles in the film, but also recorded the soundtrack for the film. The light comedy has successfully passed on the screens of the country, and after a year and a half it was decided to shoot a sequel - "Love in the Big City-2", where, of course, again, it was not without Vera's participation.

So today Vera Brezhneva successfully combines work on television, work on stage and - shooting in films: offers continue to come and Vera does not refuse them.

The singer is married to businessman Mikhail Kiperman, she is a wonderful mother of two girls, Sonya and Sarah, with whom she always finds time in her already busy schedule.