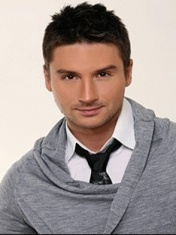 
For the vast majority of fans, the star of Sergei Lazarev first rose in 2001, when a video for the aria “Belle” from the famous musical “Notre-Dame De Paris” appeared on the screens of music TV channels. Two pretty boys, a brunette (Sergey Lazarev) and a blonde (Vlad Topalov) - colleagues in the children's ensemble "Fidgets" - at the suggestion of Vlad's mother, recorded this song for Vlad's father's birthday. Dad was so delighted with the gift that he decided to make a group out of the guys, and he himself became the producer of the group. The duo was named Smash !! And instantly drove almost all Russian girls crazy.

However, according to biographers, Sergei began his career much earlier. From 9 to 11 years old he sang in the children's ensemble of V.S. Loktev, and at the same time played at the Pokrovsky Theater. At the age of 15 he joined the famous "Fidgets", in which in 1997 he became the winner of the "Morning Star" festival. In the same year he starred in the TV magazine "Yeralash". In 1999 he entered the Moscow Art Theater School, which he graduated with honors in 2003.

Alas, the story of the duo Smash !! was, though glorious, but not long. In December 2004, immediately after the release of the album "2nite", Sergei left the duet and in December 2004 began a solo career. True, he started it not with an album, but with ... a theatrical performance. While working on the disc, he simultaneously began to play the main role in the play "Borrow a Tenor!" in his native theater. A.S. Pushkin.

In December 2005 Sergey's debut solo album "Don't Be Fake" was released, which was recorded with the participation of the famous producer Brian Rowling - producer of hits for Celine Dion, Enrique Iglesias, Britney Spears (Britney Spears), Craig David (Craig David) and Rob Thomas (Rob Thomas). The album contained exclusively English-language compositions. But Sergei did not manage to remain completely without Russian texts: in 2006 he released the single "Even If You Leave" - an adaptation of "Just Because You Walk Away" - especially for Russian radio stations.

The solo concert of Sergei Lazarev, which took place on November 16, 2011 in Moscow at the Crocus City Hall, ended with a triumph.

For 7 years, Sergei languished in anticipation of his fans, so it is not surprising that the hall was one hundred percent sold out. Lazarev, who always strives for world standards in his work, also approached his solo album in Moscow on a truly grandiose scale. According to the reviews of viewers and journalists who came to the concert, no one has done such a show in Russia!

You are the only one