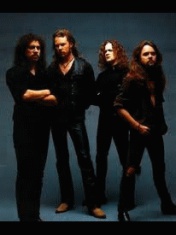 Metallica is a legendary American metal band founded in 1981. The group is included in the "big four of thrash metal". In total, over 100 million copies of the group's records have been sold worldwide. Metallica is one of the most commercially successful bands.

"Kill 'Em All" was the band's debut album, released in 1983. The disc was made in two weeks and with minimal money, as a result, the album went three times platinum, in the USA alone it sold over 3 million copies!

The album "Master of Puppets" was the last one to feature bassist Cliff Burton. The album is included in the list of "101 best albums" by Time magazine, and also took first place in the rating of "100 best albums of Metal-Rules".

The album "Load" became the sixth in a row and the first in terms of sales in the first week (680,000 copies).

The album "Death Magnetic" was the first of its kind in the history of the band, when each of its members participated in the writing of songs or created their own.

In 2011 the group surprises us and makes us happy with their new album "Lulu". It includes 10 songs recorded with the participation of Lou Reed.