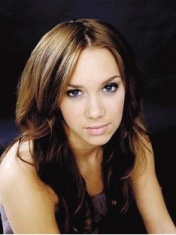 Agnes has a biography that many girls dream of: she came to the competition, won and became a world star. This "Swedish Cinderella", which in 2005 became a laureate of the show "Idol", the foreign progenitor of the "Star Factory", has really fulfilled the dream of many of her contemporaries of world fame, gained in an honest and uncompromising struggle.

I must say that on the show “Idol” Agnes really demonstrated miracles: she was the only one who could adequately work in all possible styles - she sang pop songs, and jazz, and rock, and alternative, and everywhere she looked organically and artistically, for which she received the majority of votes from the jury and the public. The result of which was a contract with Sony BMG and the release of a successful album "Stronger" in all respects. True, Sony was only set to promote Agnes in Sweden, where she already won universal love and respect. Devshuk wanted international success.

That is why, two years later, Agnes terminated the contract and released her third album "Dance Love Pop", in which she focuses on the trendy dance sound popular in the UK and USA. The result is international tours - first Agnes goes to neighboring Denmark, then to the UK and finally to Australia and the USA. At the same time, the girl already has more than one musical award in her assets, and most importantly, she knows exactly what she wants. And her main hit "Release Me", which sounds on almost all European and now American discos, helps her in this.

Her fourth album is slated for 2010 and is expected to be released simultaneously in the US and Europe. Judging by how favorably received Agnes at concerts around the world, this young rival of the transition to a different age category Beyonce (Beyonce) and Christina Aguilera (Christina Aguilera) will be able to achieve long-awaited overseas success.