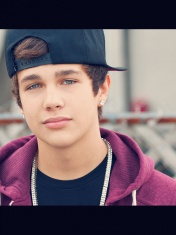 His father died when Austin was only a year old, so the mother had to raise her son alone. He spent almost all his childhood in the small town of Seguin, and later, for unknown reasons, moved to La Vernia. But she and her mother soon returned to San Antonio, where Austin attended Lady Bird Johnson High School.
In January 2011, Austin created an account on a video portal on the Internet and began posting videos in which he covered famous artists. His first fame was brought to him by covers of songs by Justin Timberlake, Kelly Clarkson, Bruno Mars and Justin Bieber. So on February 14, 2012 he released his first single "11:11". And soon he manages to sign a contract with Universal Republic Records. This was followed by the singer's second single "Say Somethin", in which Austin was helped by producer Bei Maejor.