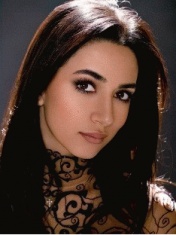 Zara was born on July 26, 1983 in Leningrad. She graduated from high school in the city of Otradnoye.

A meeting with musician and composer Oleg Kvasha became fateful for Zara's career. With him, she recorded two compositions - "Juliet's Heart" and "Just Today", which got into the rotation of radio stations and brought the singer her first popularity.

In 1997, Zara with the song "Juliet's Heart" became a finalist of the "Morning Star" television competition (Moscow) and won the Grand Prix of the International Festival "Let the Children Laugh" (Cairo and Port Said, Egypt). In 1998, the singer won the Grand Prix of the "Hope of Siberia" competition (Omsk), an open competition for performers of a new children's song "Birthday" and an international television competition "Shlyager of the Year" (both - St. Petersburg). For two years in a row, at the "Hope of Europe" competition (Sochi), Zara received a diploma of a laureate of the first degree and a Grand Prix; in 1999 in Sochi at the festival "Voices-99" she was awarded the Audience Award.

Graduated from the St. Petersburg Academy of Theater Arts in 2004. During her studies on the stage of the "Educational Theater on Mokhovaya" Zara played in the performances "Voices of the Bygone Century", "The Idiot" and "Heavenly Swallows".

In 2006, the singer became a member of the Star Factory-6 project, produced by Viktor Drobysh. In this project, Zara took 3rd place.

Subsequently, the artist released several music albums and starred in the television series "Favorsky", "Spetsnaz in Russian - 2", "The Life and Death of Lenka Panteleev" and others. The girl also got roles in the short films by Irina Evteeva "The Demon" and "Ariadne".

In 2009 she took part in the show "Two Stars", reached the final, but according to the results of the audience vote, she got the 2nd place. The song performed by Zara and Pevtsov in the final according to Zara's idea, according to producer Igor Matvienko, deserves to be released as a separate single.

The girl's first marriage was unsuccessful: the marriage with the son of the governor of St. Petersburg, Sergei Matvienko, concluded in 2004, broke up after a year and a half. The second time Zara married in 2004, the head of the pharmacy department of the Moscow City Health Department, Sergei Ivanov. On May 7, 2010, the couple had a son, Daniel.

Anyone who has ever seen Zara on stage knows that it is almost impossible to resist her talent and charm. Zara is not just a talented singer, but also a person of pure soul and sensitive heart, bringing light and kindness in her work.