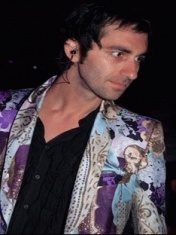 In just a few years of its existence, TOKiO managed to appear on the stage of one of the largest festivals in our country "Maxidrom", act as special guests at the Blur concert, organize their first solo concert, which was a stunning success, record their debut record and gather their army fans - albeit not very numerous, but this is only the beginning.

Each of the current TOKiO members has a lot of musical experience behind them. The band's vocalist Yaroslav Maly is not only a professional musician, but also a conductor, one of the organizers of the international festival of electronic music Ravedubrovski and, along with Gosha Kutsenko, the ideological inspirer of the Dangerous Liaisons project. Bass guitarist Demyan Kurchenko succeeded not only in theatrical art, but also in writing music for a wide variety of films. More recently, TOKiO has got drummer Roman Titenstein. The talent and predisposition to participate in the above-mentioned ensemble were noticed in it a year and a half ago, when everything was just beginning for TOKiO. And now, after exhausting rehearsals and work on himself at home, Roma has become a full member of the team.

What they do together is modern and original. It is extremely difficult to clearly define the musical direction chosen by TOKiO. Constantly experimenting, they collect musical "Lego" from all the best that was created in the twentieth century. Pop, punk, rock, TOKiO electronics are united under a common name - extreme pop. In 2004, they released their debut album called "Tokio". Half of the disc is songs by Yaroslav Malyi, written by him before the TOKiO group was finally formed. The rest came from collective efforts.

In 2006, the group wrote the song "Who am I without you" for the soundtrack to the film "9th Rota", in the same year received the MTV Russia award as the best rock project. The group also took part in the creation of the soundtrack for films such as "Heat" and "Inhabited Island", became the first Russian group to record the soundtrack for the popular computer game Need For Speed.