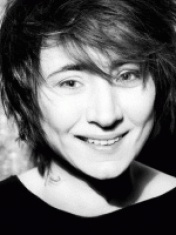 Already in preschool age, Zemfira became interested in music. At school, Zemfira managed to study at the same time in 7 circles, but made the main emphasis on music and basketball; She graduated from music school with honors, and in early 1990 became the captain of the Russian women's junior basketball team, despite the fact that she was not very tall “I was a point guard. I was the smallest, but the most important, ”the singer said, adding that she had been involved in this sport since the third grade. The national team coach Yuri Maksimov recalled: “Zemfira was very passionate about basketball, she was the best player and team captain. In 1990-1991 we won the youth championship of Russia, and, of course, I was a little upset when she decided to give up sports. "

At the same time, Zemfira learned to play the guitar and, according to one of the versions, performed the songs "Kino", "Aquarium", "Nautilus Pompilius" right on the street. According to another version, she performed hits of foreign performers in the original language, in particular, George Michael and Freddie Mercury. After graduating from school, Zemfira faced a very difficult choice for herself: music or basketball. The girl chose music and immediately entered the second year at the Ufa College of Arts, which she graduated in 1997 (class of A.K. Masalimova) with honors in pop vocal. After college, she worked part-time in Ufa restaurants, performing songs to the accompaniment of her fellow saxophonist Vlad Kolchin. A year later, Zemfira was tired of this activity, and she stopped performing.
In early 1998, Zemfira moved from her native Ufa to Moscow, where she began working with her group "Zemfira" on the first studio album, released a year later. Since 1999, Zemfira has released six studio albums that have received significant attention from the press and public. Her discography also includes a B-side collection and two live albums. In her lyrical searches, mental suffering and the search for modern youth found their embodiment. In 1999, the magazine "Ogonyok" called Zemfira "the breakthrough voice of a generation." Throughout the singer's career, many of her songs hit the first lines of the music charts in Russia, including "Arivederchi", "Iskala", "Traffic", "Walk", "We are crashing" and "No Chances".

Since her appearance in show business in 1999, Zemfira has undergone numerous changes in appearance, demeanor on stage and in communication with journalists. Her public behavior was often shocking and caused rejection by the press.

Zemfira is also distinguished by perfectionism in her work, tough disagreements with music producers. Therefore, she often produces her own albums. Zemfira's musical style belongs to the genres of rock and pop-rock. Her music is influenced by both guitar pop and harmonies of jazz and bossa nova.