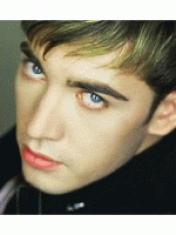 Arsenium (Arsenie Todiras) was born on July 22, 1983 in Chisinau, Moldova. He grew up in a very prosperous family and had a wonderful childhood. His mother worked as a doctor, his father as an engineer. Arseny was not a spoiled child, his parents left him to choose his own path in life, but they were always there and helped with advice.

As a child, Arseny was a great dreamer. His biggest dream, bigger than the country in which he was born, was to become a famous musician, the one whose songs will go down in the history of music. Arseny really liked to sing, he grew up on Russian music, and constantly tried to imitate different singers. At the time, he had only one fan - his younger sister, whom he called "the best in the world."

Arseny began writing music at the age of 15, and it captivated him so much that he could not stop. Through music, he tried to express his feelings in real life. At the age of 16, he first began performing on the big stage of Moldova - he sang in the Moldovan folk group "Stejareii", where he also played the double bass. But his first performance as a soloist was at school, which he said was pretty funny. He tried to perform a part from one opera, which turned out to be more or less successful.

At the age of 17, he entered the Chisinau Conservatory, where he began to take singing lessons from Larisa Shulgina, a great opera singer known throughout the former USSR. She put into him very important knowledge necessary for an artist and became a very important person in his life. It was she who introduced Arseny to Dan Balan, who at that time was recruiting members for his new group. Despite the fact that Arseny just started to seriously study singing, Dan decided to take him into the group. At first, Arseny mainly read rap. A few weeks later, Radu Sirbu was included in the group. This is how the O-Zone group appeared. The new group became very popular in Moldova, and after conquering the Romanian music market, it conquered the whole of Europe. However, in 2005 the group broke up at the peak of its popularity.

In "O-Zone", Arseny received a lot of experience, which will undoubtedly be useful to him in the future. But the moment came when it was necessary to take the next important step - Arsenium.

Arsenium is the name of his new solo project. Already in the summer of 2005, Time Records (Italy) released the first disc - the single “Love me ... Love me”, which included the original song and several remixes, as well as a video clip. The text and music were written by Arseny himself.

Arsenium has now finished work on his solo album, The 33rd Element, and also starred in the video for the song Loca, which he performed with Natalia Gordienko (ex- Millenium) and Romanian rapper Connect-R. It was with this song that they represented Moldova at the Eurovision Song Contest 2006 in Athens.

Participation in the "Dansez pentru tine" competition was another turn in the creative life of Arsenium, showing us not only as a talented singer, but also as a good dancer. The show took place during the period of serious preparation for Eurovision, but this did not prevent Arseny and Aleone Muntean from taking an honorable second place.

Marina and The Diamonds