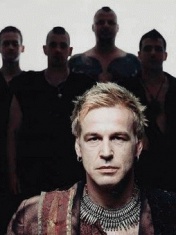 In Extremo (translated from Latin: "at the end" or "on the edge") is a German folk-metal band, originally from Berlin. The main work of the group is represented by the processing of ancient and medieval ballads and songs in various living and dead European languages: German, Latin, Swedish, Old High German, Old French, Old Swedish, Icelandic, Spanish, etc. In music, along with modern instruments (electric guitars, bass guitars ), many ancient musical instruments are also used, such as bagpipes, harp, lute, flute, etc.

At the beginning of their career, the band played almost entirely instrumental folk-rock based on old songs and music. Beginning with the album "Weckt die Toten" in 1998, the music took on the distinct character of folk metal with an organic touch of heavy metal. The 2001 album "Sunder Ohne Zügel" reflected the band's bias towards industrial metal, but the basis was still folk metal based on early music and lyrics.

The group, among other things, is known for its vibrant stage shows. The musicians create the impression of a concert of medieval wandering musicians on the stage with the help of old and stylized medieval costumes, tricks with the fire of the vocalist of the group, etc. Due to the impressive shows at concerts, the original style and the growing public interest in various directions of folk music in general, the group In Extremo has achieved widespread recognition in Germany and abroad.