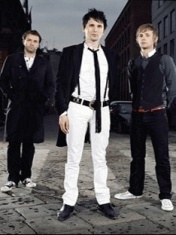 
Muse is often referred to as one of the main musical hopes of our time. Indeed, the musicians have taken so much from the classics of rock and transferred a fertile seed to modern soil that it is inevitably time to write them down into modern classics. And even the very beginning of Muse's career has already determined that musicians are determined to conquer the greatest musical heights.

At first they turned out to be the winners of the local The Battle Of Bands and, having acquired a solid fan base, Muse began to haunt record labels with an eye to releasing their first album. The debut album "Showbiz" was received ambiguously by critics - the music was too eclectic. Bellamy absorbed all possible British sound currents, and the expressiveness of the texts, which at times bore an openly confessional character, pleased young people - it is always pleasant to try on the mask of an incomprehensible genius.

But Muse wanted to show critics that in their eclecticism they do not follow in the footsteps of Radiohead — Bellamy confesses his love for classical rock, in particular for Queen, and says that, like them, he wants to combine the incompatible in his work. The second album "Origin Of Symmetry" was full of various sound surprises here and the church organ, and mellotron, and pompous, even a little cumbersome arrangement of songs. And Bellamy's hysterical falsetto and thundering guitars added a sense of general nervousness to the disc, which somewhat frightened Bellamy in the end - he was worried if the disc with such an ambiguous mood component would sell successfully? But the album became a hit, however, the group quarreled with Maverick records and went under the wing of Warner - for the sale of the album in the USA, the previous record company demanded to re-arrange individual songs. Bellamy didn't want that.

The released live DVD and the album “Hullabaloo” proved to the whole world that Muse is not in vain considered one of the strongest live bands (it is not known what U2 thought about this). Meanwhile, the group began work on their third studio album, which was fueled by the US and British military campaign in Iraq. The album "Absolution" became even more depressing and hysterical than the previous records of the group, and Bellamy was recorded as the main social heroes of our time.

Then Matthew decided to leave aside the sad thoughts and try to do what any self-respecting band should do — write a concept album. The album "Black Holes And Revelations" instantly became the leader of the charts, although critics noted that Bellamy's depression did not go away, it was rather simply hidden by the guitar arrangements.

The next step on the group's creative path was the creation of the album on its own, without the involvement of third-party producers. The Resistance disc returned Muse to the path of musical eclecticism, presenting the audience with dance songs, and even - playing in a symphonic style: the musicians invited a live orchestra to record. All these experiments, as well as incessant live performances, continue to allow Muse to hold the bar high as one of the most interesting and diverse young bands. However, the word "young" is probably no longer quite applicable to them — they have long since moved to the status of world-renowned stars.

05:09
Map Of The Problematique (Live From Wembley Stadium)

04:19
Time Is Running Out (Live From Wembley Stadium)