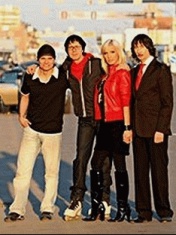 
A-Studio group (short for the original name "Almaty-Studio") was formed in 1988. The collective, which in different periods of development focused on simplified jazz-rock, disco, Russian Brit-pop, has now discarded all stylistic prefixes and concentrated on solid pop music.

One of the characteristic and distinctive features of the group is that almost all of its members have a musical education. Quite a rare phenomenon among the artists of the post-Soviet space. Perhaps due to this, during its long history, A-Studio has dramatically changed not only the sound, but also the style.

The story of the formation of the ensemble is rather dark and, as usual, it does not do without the main characters of the national stage A.B.P. and F.B.K. They say that Philip Kirkorov, having heard their first hit "Julia", showed the song to Alla Pugacheva and said that the musicians from the tavern gave it to him. To this the perspicacious prima donna replied that they don’t give such songs and wished to personally meet with the “unlucky hoes”.

This fateful meeting for musicians took place in 1989. Then Pugacheva invited them to work in her Song Theater. And it was then that the current name (A-Studio) was adopted instead of the semi-Oberiut “Almaty-Studio”. And in January 1990, at the "Christmas parties", the woman who sings recommended her protégés as the best and most stylish group in the country. Frankly speaking, a good PR for a team playing in a cultural vacuum. Needless to say, they woke up famous the next day?

The triumphant capture of all the stadiums and sports palaces of the USSR under the patronage of the Song Theater; shooting a documentary film "Julia" dedicated to their work; finally, the recording of the album - all this could not keep the frontman of the group Najib Vildanov and the guitarist Bulat Sezdykov in the collective. They were replaced by Batyrkhan Shukenov and Baglan Sadvakasov, respectively.

At the same time, the group is trying to cooperate with the famous British label "Poligram". Three tracks are recorded in English, and this is where the foreign language creativity ends. The decade of the 90s is held in a series of concerts, festivals, recordings. Musicians change labels like DJs change records. Among their chefs are the once mighty SOYUZ Records, the pretentious ORT Records and many others. In 2000, singer Batyrkhan Shukenov left the group. The musicians recall the bright vocalist whom they met in the States on their regular tour. Her name is Pauline Griffiths. Without hesitation, they invite her to the place of Batyrkhan. Two years pass in a format that is new for artists: the music has more dance mood. However, soon this artist also leaves the team.

In autumn 2004 a new vocalist Keti Topuria joined the group. “Take care of this girl, she is a real star,” said Murat Nasyrov about the new vocalist of A-Studio. And indeed, with the new singer, the collective seems to acquire fresh blood. The artist brings to the music what the musicians lacked so much: youth.