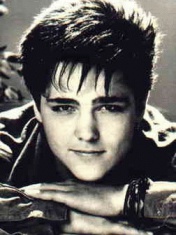 On September 6, 1973, Yuri Shatunov, a Russian singer and former member of the Laskovy May group, was born. He lost his mother early and was taken to the upbringing of his aunt, but not for long: soon the boy ended up in an orphanage and then in a boarding school.

In 1986, Yuri met the head of the music club of the Orenburg boarding school, who helped him record his first songs.

And so the group "Tender May" was formed. But soon the roster underwent changes: Sergei Serkov and Vyacheslav Ponomarev joined the guys. Then the group starts performing in discos and gradually its popularity grows.

In 1988, thanks to the efforts of Andrei Razin, the composition of the group was renewed again, and now it will exist in this form until 1992, until Shatunov decides to pursue a solo career.

In the same 1992, his first solo album was recorded under the ironic title "That is the end of May", but then the name changed to "You Know". The album went on sale in 1993.

In 1994, PolyGram Russia signed a contract with Shatunov. Videos for the songs "Starry Night" and "And Falling to Your Knees" were shot.

In September of the same year, Yuri's second album, "Do You Remember", was released.

The remix album "Artificial respiration" was released in 1996.

Further, Yuri will have long experiments with sound and searches for a new style, and finally, in 1999, he manages to record completely new songs: "Don't Cry", "Last Snow", "Night Station", "Chance Meeting", "Summer Has Rounded" , "And the night is dark", "Your tears", "Just dreams", "July rain".

It was planned to return to the big stage, which happened in 2002 in Estonia, in the city of Tallinn. Yura performed with an excellently prepared program, the fans were simply delighted. In the same year, the albums Gray Night and Leaves are Falling.

The new album of the singer "I Believe" was released on June 29, 2012. At the moment, Yuri's concerts are planned in the cities of Russia and Ukraine.