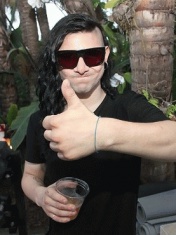 In 2012, Skrillex ranked second in the top 10 highest paid DJs in the world according to Forbes, and surpassed such stars as David Guetta, Swedish House Mafia, etc. with $ 15 million in revenue.

In addition, Sonny Moore has another project - Dog Blood, a band consisting of Sonny Moore and Boys Noise.

Try It Out (NEON MIX)