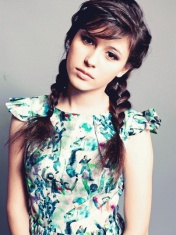 Elvira T is exactly the singer that Russian show business has missed. A young, talented, and most importantly sincere girl with an unusual and recognizable tone of voice. She is only 17 years old, but she writes all her songs herself. It is worth listening to her tracks and, involuntarily, you wonder: how can a teenager write such penetrating texts? Having no musical education, she independently learned to play the synthesizer and can play any melody, relying on her ear for music.

Elvira's life is like a fairy tale. The girl was born and raised in Saratov, but she always knew that sooner or later she would go to conquer Moscow. As time went. Step by step, Elvira approached her dream. At the age of 16, she recorded her first hit "It's All Decided", which you hear today on the air of central radio stations. But in the beginning, this song became a hit on the internet. It could not be otherwise. Elvira's songs leave no one indifferent. The singer captivates with her purity and sincerity, she does not know how to play, as if she understands everyone and everyone at the same time.

In the summer of 2011, Elvira shoots her debut video for the song “Everything is decided”, in which the main male role was played by a young, favorite of the female half of the population and popular among young people, actor of the series “Closed School” Pavel Priluchny. In parallel with the filming, Elvira successfully passes the entrance exams and enters an institute in Moscow.