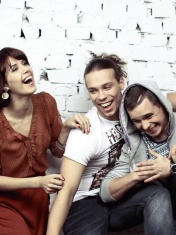 "T9" - St. Petersburg hip-hop group. The popularity of the group came after the release of the television series "Ranetki", where their song "Ode to Our Love" (which featured the song "Tears Of The Ocean" by Japanese pianist Keiko Matsui) became one of the main musical themes.

The initial composition of the "T9" group is as follows: Vladimir Vazhny, Maxim Treez, Marina Grace and Beatwell, each of them creating independently: each one writes the lyrics for himself, and the music is made together, in the group there are 3 full-fledged soloists. "T9" live and create in St. Petersburg. According to TopHit, the song "Ode to Our Love (Breathe In-Out)" became the most popular Russian-language song in 2009 on Russian radio stations. But the question remains open about the likelihood of prosecution for the use of someone else's musical composition in a famous hit.

The first video clip for the song "Ode to Our Love" was filmed for the group by the film company HHG back in 2008 and immediately became the leader of the charts of almost all music TV channels. In 2009, a new video from T9 appeared in the rotation of TV channels - a video for the song Drafts of Sadness.

On June 5, 2009 "T9" performed at the Olimpiyskiy at the MUZ-TV Awards (nominations: Best song; Best hip-hop project). And on June 25, they were awarded the "God of Ether" prize, which took place in the Ice Palace of St. Petersburg (nomination: Best soundtrack). In November 2009, the T9 group won the Golden Gramophone award.

Continuing to walk on the knurled group "T9" writes the soundtrack to the youth comedy "Pickup: Let's Take Off Without Rules." For this song, which is called "Give me a couple of minutes", the group is shooting a video.

In March 2010, a video clip of the T9 group and Yulia Savicheva appeared on the country's music TV channels, which in a few days won the hearts of listeners and came out in the top 5 best clips on MUZ-TV and MTV channels. The filming of the video for the song "Ships" under the direction of director Yevgeny Kuritsyn took place at the end of last autumn on the dry Aral Sea.

In April 2010, the T9 group filmed another video clip, but now in sunny Cyprus. Actually, this shows us the growing popularity of the group. The clip appeared in the rotation of TV channels in May 2010, a new video was shot by the T9 group for the song "Summer".

For the 65th anniversary of the Great Victory, the T9 group recorded an unexpected duet - this is a joint work with Alexander Rosenbaum under the title “Maybe there was no war ...”.

In 2009-2010, they became a record for the group in terms of the number of performances at large venues, as well as the number of filming of shows and concerts on the country's top-rated TV channels (Channel One, Russia, MUZ-TV, MTV). Over the 3 years of its existence, the T9 collective has given about 200 concerts.

The composition of the group did not change all this time until the spring of 2011. Now in the team Vladimir (Vazhny) is a soloist, Marina is a soloist, beatboxer BeatWell (the best beatboxer in Russia) and saxophonist-virtuoso mr. Nuts (ex-participant of the DOM-2 TV project).

In 2012, "T9" released a new hit "At the Distance of Love", with which they performed at the MUZ-TV award. Also, the guys have already shot a video for this song. At the moment, the group has only one album - "Inhale, Exhale" (2008). However, the band is now actively touring and working on their second studio album.