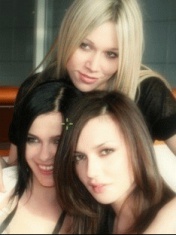 
Practically unknown until 2007, the Silver group was at first just one of the numerous production projects of Maxim Fadeev - in the process of creating the material and developing the group's image, it was unclear whether the group of three unknown girls would become really popular. However, the group unexpectedly managed to "shoot" at Eurovision-2007, taking the third prize, which served as a springboard for the team to great fame in Russia and abroad.

Elena Temnikova, a future member of the Silver group, first became known as a participant in the television project Star Factory-2, which was produced by Maxim Fadeev. Having taken the third place according to the results of the audience vote, after the end of the project, Elena continued to work with Fadeev. In the process of cooperation, the idea of creating a three-member female pop group was born.

Olga Serbyakina (who worked on backing vocals for the singer Irakli) and Marina Lizorkina became members of the group, having passed the competitive selection. Initially, the "launch" of the group was scheduled for 2008, but in 2007 Fadeev decided to present one of the band's songs to the Russian selection round of the Eurovision Song Contest. By the decision of the expert council, the song "Song # 1" by the "Serebro" group was allowed to participate in the competition. The performance in the final of Eurovision on May 12, 2007 was the first concert of the ensemble. As a result, the song "Song # 1" took third place, and the group instantly became famous not only in their homeland, but also in a number of European countries. Serebro released a single, began recording songs in English for a Western audience, and won a number of awards in Russia.

On April 25, 2009 the debut album "Opium Roz" was released. In June 2009, Marina Lizorkina left the group, and was replaced by a new soloist Anastasia Karpova.