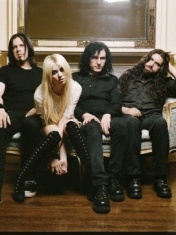 The group was formed in October 2008. The first line-up consisted of John Sekolo, Matt Chiarelli and Nick Carbone. In early 2009, The Pretty Reckless released several demos and opened for The Veronicas. On June 4, 2009 Momsen decided to part ways with the band members due to a mismatch in musical tastes and invited new musicians. The band signed to Interscope Records and released their debut album on August 30, 2010. In an interview, Momsen stated that the band's style will be "unexpected", with a heavy sound, but at the same time with fun and light features; influenced by bands such as Marilyn Manson, The Beatles, Oasis and Nirvana; Momsen was personally influenced by Marilyn Manson, Kurt Cobain and Joan Jett.

On December 30, 2009, the group released the song "Make Me Wanna Die", which has been available for free download for some time on the group's page on Interscope Records. The song was featured on the Kick-Ass soundtrack and became the band's first official single. "Make Me Wanna Die" peaked at # 1 on the UK Rock Chart for 6 weeks.

The band's first EP was released on June 22, 2010. Most critics liked the music, although Rolling Stone magazine called it "ordinary". The EP The Pretty Reckless included 4, 3 of which went on to the album: Make Me Wanna Die, My Medicine and Goin 'Down.

Album "Light Me Up" was released on 30 August 2010 in the UK and 31 August in other countries. The second single was “Miss Nothing”.

House on a Hill

03:13
Waiting for a Friend
Все видеоклипы The Pretty Reckless (33)