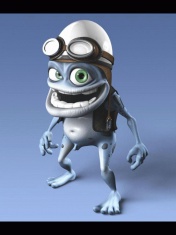 In 1997, a 17-year-old student from Gothenburg, Daniel Malmedahl, posted on the Internet his attempt to mimic the sound of a moped starting up with his voice. Sound recording has become widespread in the form of mp3 recordings and flash videos. Daniel was even invited to Swedish television to repeat the sound live.

The musical history of Crazy Frog began in 2005 when two members of the German production group Bass Bumpers, Henning and Reinhard Wright, were commissioned to compose a dance single based on the ringtone Crazy Frog. This is how the project "Axel F" was born and its dance remix on the title theme from the 1984 film "Policeman from Beverly Hills", where Eddie Murphy plays a character named Axel F (Axel Foley).

In 2005, a video was released for a remix of "Axel F" (sometimes referred to as "Crazy Frog song" to distinguish it from the original). This remix was ranked # 1 in the United Kingdom, Ireland, Turkey, New Zealand, Australia and many European countries.

In many countries, the song did not leave the charts for several months, until the release in August of Crazy Frog's second single "Popcorn", a reworking of a song by Hot Butter, which premiered on the popular TV show "Top of the Pops".

In July 2005, Crazy Frog's full-length album, Crazy Frog Presents Crazy Hits, was released. In addition to popular singles, it included mostly the same rework of old famous songs in the style of Crazy Frog. The list of songs included such famous songs as "Pump Up the Jam" and the title theme songs of the Pink Panther cartoon and the Dallas TV series. There were, however, original compositions on the collection, for example, "In the 80s" and "Dirty Frog".

In November, the first album of the project was reissued in a new, festive version called "Crazy Christmas Edition" - in addition to the new cover, the album had several Christmas bonus tracks, including the version of "Jingle Bells", released as a separate single.

In May 2006, two new Crazy Frog compositions appeared on the football compilation Football Crazy, the release of which was timed to coincide with the World Cup.

The football theme also crept into the Crazy Frog's own work - the first single from the new album was the song “We Are the Champions (Ding a Dang Dong)”.

The second full-length LP, simply titled "More Crazy Hits", was released in June 2006. The recipe was the same - reworking old songs plus some of our own compositions. This time the album includes songs such as "I Will Survive", "I'm Too Sexy" and "Ice Ice Baby".
The participants of the "Crazy Frog" project note that the uniqueness of their character is that for the first time in the history of music a ringtone for a mobile phone, written on the motive of a famous melody, became the reason for creating an animated hero.

Crazy Frog has also spawned a range of merchandise and toys, as well as two video games.