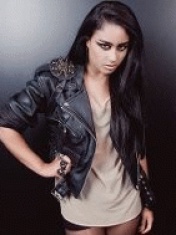 Natalia Kills was born on August 15, 1986 in the UK. She spent her childhood in London and Barcelona with her grandparents Noemi and Fred Keery, and studied at the Yorkshire College of Music and Drama.

At the age of seven, Natalia made her debut on the English television show New Voices. She had a recurring role in the comedy "All About Me" as well as a drama show on BBC radio. At this time, she begins to write her first songs, which became the soundtrack for many radio and television shows. In 2003 Natalia signed her first contract with a record company and in 2005 released her first single "Don't Play Nice", which reached number 11 on the UK national charts.

In 2008 Natalia moved to Los Angeles, USA to continue her creative career. In January, her demo tracks took first place on the popular social network MySpace among unsigned artists. In May Natalia was noticed by the famous member of The Black Eyed Peas and producer Will.i.am. In November 2008, she signed with the major music label Interscope. On October 29, 2009, the single ZOMBIE was officially released under the new stage name Natalia Kills, which most clearly reflects her character. The stage name was coined by music producer Martin Kirsenbaum, who is responsible for Lady GaGa's worldwide success and other successful Interscope projects.

On April 1, 2011, the release of the debut album "Perfectionist" took place in Germany, the music and lyrics to which were written entirely by Natalia Kills, the album was produced by "The-Ron" Feemster, Fernando Garibay and Jeff Bhasker. For the release of the album, a mini-series "LOVE, KILLS, XX" was prepared, authored and directed by Natalia herself. It was in "Love, Kills, XX" that songs from the debut disc were played for the first time. The first single from the album "Mirrors" was released in August 2010 in the USA and in Natalia's homeland - England in April 2011. The single enjoyed particular success in central Europe and for this reason the label decided not to delay the release of the album in Germany. In the summer of 2012, the music video "Lights Out", created in collaboration with DJ Junior Caldera and the Far East Movement, premiered, which immediately took the lead in the charts.