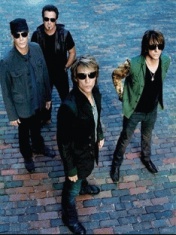 
Jersey Jon Bon Jovi from childhood wanted to become a musician and chose the shortest path for this, in his opinion - he got a job at a recording studio. He worked as a simple cleaner, but got access to the equipment. In the evenings, after work, he recorded his first demos, which he began sending out to various record companies. As a result - John got a contract with Mercury, and began a dizzying career in the world of rock music.

The Bon Jovi style was a cross between hard rock, glam rock and country, and the lyrics about the life of ordinary working guys instantly elevated the young group to the rank of hitmakers, however, traditional rock critics ostracized Bon Jovi for being too pop. However, it is not unreasonable.

When the glory of Bon Jovi began to fade somewhat by the end of the 90s, the musicians managed to make a powerful comeback with the Crush disc, the main hit from which It's My Life again topped the charts.

True, the style of the group has not undergone any special changes - it is still the same border genre between rock and pop music. However, the availability of musical material allows the group to successfully perform and collect large venues in America to this day.

03:36
Welcome To Wherever You Are
Добро пожаловать, где бы ты ни был

03:50
2
All About Lovin' You
Всепоглощающая любовь к тебе

Scars On This Guitar

05:43
My Guitar Lies Bleeding In My Arms