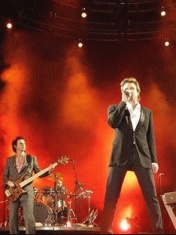 
Duran Duran was founded in Birmingham in 1978. The musicians borrowed the name of one of the heroes of the movie "Barbarella" as the name. After spending two years sorting out the line-up (Duran Duran's first vocalist was Stephen Duffy, future co-writer Robbie Williams), writing songs and making a decent demo, the band got a contract with EMI, and in 1981 saw the light first album by Duran Duran. The group was not without reason ranked among the neo-romantic wave. Bands like Adam and the Ants and Spandau Ballet had in common not only music, but also their attention to visual images. Throughout their career, Duran Duran has collaborated with fashion designers: first it was Kahn & Bell, Anthony Price, later - Vivienne Westwood and Giorgio Armani. An important component of Duran Duran's success was also bold, defiantly sexy video clips "on the brink of a foul", which, even for the broadcasts of the then liberal MTV, often had to be edited.

Duran Duran quickly soared to the top, and in the first half of the eighties were one of the most successful bands on the planet. "The Most Handsome Boys in Rock Music" marched victoriously - their albums went platinum, and their singles almost never missed the top ten charts in both the UK and the US. The general insanity was like Beatlemania. In 1985, tired of the endless race, the musicians decided to temporarily scatter for side projects. The last single recorded in the original lineup was the theme for the next Bond series entitled "A View To A Kill". The three of them have already started working on the next album, having lost their guitarist and drummer (they were partially replaced by longtime Duran Duran colleague producer Nile Rodgers). And if the disc "Notorious" practically repeated the success of the previous records, then the end of the decade came out crumpled - Duran Duran tried to grow up together with their audience and without much success looked for a new sound.

The second wind came to the group in the mid-nineties. The new wave was replaced by melancholic rock, due in part to new guitarist Warren Cuccurullo. The visiting cards of the then Duran Duran were the songs "Ordinary World", "Come Undone", "Out of My Mind" (included in the soundtrack to the film "Saint"). The action movie Electric Barbarella, reminiscent of the old days, also became the world's first single to be sold over the Internet. In 2000, the group reunited in the classic line-up. In their third decade of activity, the Duran Duran group acquired the status of masters: they collected prestigious awards, played sold-out concerts at Wembley, performed at the opening of the Olympic Games in Turin, at the Nobel Prizes, and their singles "(Reach Up for the) Sunrise" , and "What Happens Tomorrow" did well on the charts. The group even tried to ride the fashion wave again by hiring producer Timbaland to record the "Red Carpet Massacre" CD, but the idea failed. On the 13th album, on which the collective is working now (again without Andy Taylor), the group promises to return to the roots and sound again just like in the "golden era".

04:28
Is There Something I Should Know