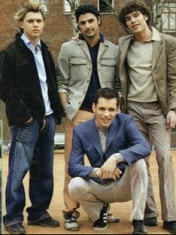 
When you look at our boy bands, you involuntarily recall the phrase from Gennady Khazanov's humoresque "we would have striptease before retirement, no one would have said a word." Okay "Ivanushki" - they at least exploit their former popularity. But what are "Roots" doing, which will soon be eight years old? Where are they developing, what do they want to achieve? There are no answers.

The Malchukovy quartet was born at the first "Star Factory" at the end of 2002, simultaneously with the women's group "Factory" - producer Igor Matvienko tried to make two beautiful projects out of his best wards. For "Roots" hits "I am losing roots", "Birch was crying", "You will recognize her" were written in the favorite genre of Matvienkov's "pop a la russe", and the four guys quickly grew into an audience of young fans.

In 2003, the debut album was released, which contained not only Matvienko's songs, but also his own compositions "Roots". In the future, the group preferred to express themselves not with albums, but with singles. So, in 2004, Alexander Astashenok wrote the song "Happy Birthday, Vika", which became popular (it is possible that due to the similarity of its chorus to "Our Youth Team").

In 2005, Igor Matvienko gave his wards an almost tsarist gift - he released a quadruple (!) Album "Diaries", where each "root" received a whole disc for self-expression. Kabanov's record turned out to be more danceable, Astashenok demonstrated a craving for high-quality stage (having overheard some of Yuri Antonov's motives this time), and in general, "Roots" seemed to show a willingness to work independently.

But paradoxically, on the "Diaries", the creative development of the project participants slowed down. Perhaps the teenage pop music market, accustomed to one or two tracks from the project a year, was unable to digest four dozen songs from its heroes at once. It is not excluded that the "Roots" themselves, having received such an unprecedented amount of repertoire for "manufacturers", considered themselves to be provided with songs for the rest of their lives. At least after the "Diaries" no new song has been compared in popularity to the same "Vika". Note also that the Fabrika group throughout its career has enjoyed greater favor with the composer Matvienko than the Roots: apparently, the girls' collective brings more orders for corporate events.