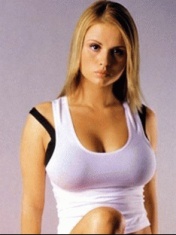 
About Anna Semenovich there is a large number of very diverse opinions: someone considers her a glamorous socialite, someone remembers her sporting successes, someone admires her magnificent forms, and someone is thrilled by film works. Nevertheless, such a wide range of the girl's activities cannot but command respect.

Anna began her career as an athlete — a pair of figure skaters Anna Semenovich-Roman Kostomarov was considered one of the strongest Russian couples, but a meniscus injury forced Anna to leave the big sport. Then the girl faced a serious choice — either to pursue a sports career (for example, to go to ice ballet), or — to start something new. Anna chose the latter: she became a TV presenter.

But her television career did not last long either — Anna was noticed by the producers of the "Brilliant" group and invited her to join the group. Since Anna already had a little musical experience (she did not work for a long time in a collective called "Charlie's Angels"), she gladly agreed. After Zhanna Friske left the group, it was on the adorable Anna that all the attention of the "Brilliant" fans focused - they rejoiced for four long years: from 2003 to 2007, until an extreme cocktail from sports and television forced Anna to leave her work in the group.

Today Anna Semenovich successfully combines work on television (the Ice Age show) with filming in films and occasional performances with solo songs. In the asset of Anna, the album "Rumors" recorded in 2008, and a large number of proposals from various authors and producers. So if the love affair with television dies down, let's hope that Anna will delight fans with a new disc in the near future.