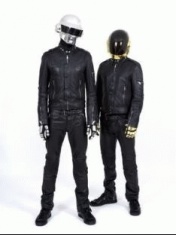 Daft Punk made history as the first electronic band to contract with a major label on their own terms. After making a splash with a couple of singles released by the techno label Soma, the French began to receive offers for long-term contracts. Enlisting the support of manager Pedro Winter, who would later open Ed Banger's label and become the patron of Justice, Thomas (whose father, incidentally, had a hand in many of the hits of Ottawan and Gibson Brothers) and Guy-Manuel began to knock the opportunity out of labels. control the creative process. "We weren't particularly interested in money," Bangalter explained, "so we just turned down labels that wanted to get involved in the band." As a result, Daft Punk became Virgin customers. Album "Homework", where guys in equal proportions mixed techno, house and disco, went so well that even in the USA it became "gold", and Daft Punk became trendsetters, setting an example for everyone. Neither the wave of French house, nor the success of Miss Kittin and Vitalic, nor the emergence of Justice would have been possible if Daft Punk had not paved the way for them.

The rules of the Daft Punk music establishment were openly scorned. They did not lead a social life, rarely gave interviews, wore masks at concerts, and did not even appear in video clips in principle. Visual images, however, became the hallmark of the group, and the French approached the clips with special care, selecting the best directors. The fact that the first two videos for Daft Punk were directed by Spike Jonze and Michel Gondry speaks volumes. The album "Discovery" formed the basis for the animated feature film "Interstella 5555", shot by the Japanese studio Toei Animation, and the most successful single from the album was the song "One More Time", for which Daft Punk even invited the vocalist of Romanthony. The song hit the top ten charts in several European countries, in Britain it became the second, and in the homeland of the group climbed to the top. The third disc, "Human After All", actually became the harbinger of the electronic wave of nu-rave. The sound became harder, and rock drive suddenly appeared in the dance tracks. On top of that, Guy-Manuel and Thomas took control of the visuals and began filming video clips with their own hands.

Daft Punk was nominated seven times for a Grammy, but the awards were unexpectedly brought to them not by the studio album, but by the live album "Alive 2007". The CD won Best Electronic Album and Harder Better Faster Stronger won Best Dance Recording. Not least was the fact that a sample from this track became the basis of Kanye West's hit "Stronger", and a year before receiving the award, Daft Punk unexpectedly showed up at the anniversary awards ceremony to perform this song with Kanye.