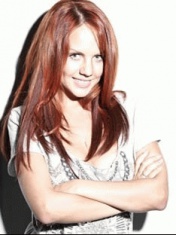 Even some academic critics who don't like pop music enjoy MakSim's songs. The tenderness and sincerity of the pop songs of the "snowflake girl" turned out to be in great demand on our stage - despite the crisis in the recording industry, the singer's discs were sold in millions of copies. In addition, Marina showed an excellent example of how high a person can fly with the help of their own talent. While the young talents were pounding the doorsteps of the "Star Factories" in the hope of quick glory, a girl from Kazan wrote cute songs and waited to be heard. I waited.

Marina was born on June 10, 1983. Her strange pseudonym (however, everyone has become accustomed to and stopped being ironic over the singer's male name) is taken in honor of her brother's name and mother's maiden name. After participating in a number of little-known projects and minor competitions, MakSim recorded the songs "Difficult Age", "Tenderness" and "Centimeters of Breathing" in 2003. The compositions hit regional radio stations, and the singer began to be recognized. When Gala Records was convinced of this, she took MakSim under her wing. Locally known hits are re-recorded in a new quality and become the basis of the first album "Difficult Age" (2006). Video clips were shot for several songs, which are successively launched on music TV channels. MakSim's popularity is growing, thousands of girls associate themselves with their lyrical heroine, the singer becomes the most touring artist, and the total circulation of "Difficult Age" reaches one and a half million copies.

The second album "My Paradise" was predicted to be much more modest success, but it almost repeated the success of the debut. Marina managed to move from teenage perspectives to more mature texts and various arrangements without any problems. There were, perhaps, fewer hits on the album, but it is quite enough to get a full house in 2008 in the Olimpiyskiy Sports Complex.

In 2009, the singer gave birth to a daughter, Alexandra, from her sound engineer Alexei Lugovtsov, and at the end of the year she released her third album, Lonely. MakSim's songs have become even more mature, with elements of rock music, but the singer emphasizes her belonging to the pop genre, although she once performed at the B-1 Maximum club.