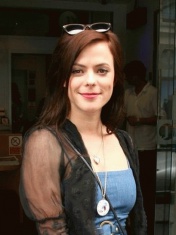 Lenka (Lenka Kripach; English Lenka; English Lenka Kripac; born March 19, 1978, Sydney, Australia) is an Australian actress and singer [1]. She is known for performing her own song "Everything at once" (Russian "All at once"), the video clip for which [2] became the basis of the commercial for Microsoft's Windows 8 operating system.
Actress
In the 1990s, Lenka starred in the Australian ABC-TV series GP [en] as Vesna Capek. She has also hosted Cheez TV and guest-starred on a number of other Australian television series such as Home And Away, Wild Side, Head Start and Spellbinder. She played small roles in the films The Dish and Lost Things, as well as in a number of theatrical productions [5].
Singer
Since 2004 she has performed under her real name as part of the Australian crossover band Decoder Ring [en], which has recorded two of their albums with her [10].
In 2007 she moved to California and began her solo career [11]. As an artistic pseudonym, the singer used her own name, discarding the last name. On September 24, 2008, her first album was released, a song from which entitled The Show became the singer's first single released [12]. The album peaked at # 142 on the US Billboard 200 [11].
In 2010 she recorded two songs for the studio album Atemlos of the German music project Schiller (Addicted and Sunrise).

02:42
В избранное Новый плейлист
9
Клип Lenka - Everything At Once