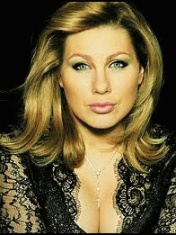 Russian singer, songwriter and ex-soloist of the Russian group "Guests from the Future" Eva Leonidovna Polna, known as Eva Polna, was born on May 19, 1975 in Leningrad. On her
more than one generation has grown up in songs. Bright and popular, she always remains at the peak of fame and inspires her colleagues in the pop shop with her creativity. Eva Polna is the most rotated
performer at radio stations in Russia and the CIS countries in 2013.

Several years ago, Eva began her solo career, but fans still remember the talented singer as part of the "Guests from the Future" group. She not only performed songs that for a long time occupied the top lines of the charts, but also came up with stage costumes and was the director of the show. In a short time, Eva was able to make a dizzying career.

Eva was the only child in the family, and her parents never thought that her daughter would become a singer. As a child, Eva dreamed of conquering space and was fond of science fiction. This passion was closely intertwined with a love of music. The girl not only sang well, but also danced. Eva studied in an ordinary school, and after graduation she entered the Leningrad State Institute of Culture named after I. NK Krupskaya, which she graduated in 1996. At the school she received
the profession of a librarian-bibliographer. In addition, the future popular singer studied at a different faculty at the same time, mastering marketing and management. Then she graduated from the St. Petersburg Academy of Culture and Arts. The singer is a choreography teacher by profession.

For the first time, Eva Polna appeared on the stage as part of the St. Petersburg rap group "A-2". There she was just a dancer and backing vocalist. A year later, the future star left the team, but, of course, not the stage - this was just the beginning. For some time, the girl performed in various St. Petersburg clubs, where she sang classic rock ballads of the 70s. Eve could sing for hours. Her personal best is five
hours of singing without interruption.

In 1997, she accidentally met Yuri Usachev, who at that moment was looking for a vocalist for his own musical project. He heard Eva in a St. Petersburg club and realized that a girl with such an original voice needs to be soloed. And immediately made her an offer for a joint
creativity. The project was named “Guests from the Future”. After the release of the album "Run From Me", fame literally fell on Eve and Yuri.

Guitar compositions with Eva's melodic voice "This is stronger than me", "So important", "To break the windows of your soul" won the hearts of fans and soared to the top of the charts. At this time, the group had already received recognition and a huge army of fans throughout Russia to boot. The album "It's Stronger Than Me" was commercially successful and elevated the group to the cult status. Sold-out concerts, radio rotation of songs, interviews have become part of the artists' lives.

In 2009, Eva Polna announced the breakup of the group and the beginning of her solo career. The singer's fans did not understand why she decided to leave "Guests from the Future". According to Polna, she saw no more reason to stay in the group. Eva writes songs and music on her own, she has no desire to collaborate with other people. Creativity is an element in which she lives, like a fish in water, therefore, in addition to singing, Polna is engaged in painting and developing her own clothing line.

Soon after the collapse of the "Guests from the Future" group, Eva Polna released the single "Guys Don't Cry" and shot a music video for this composition. In 2010, the singer recorded the composition "Mirages", where she traditionally acted not only as the author of the song, but also again as the director and scriptwriter of the video. In addition, her eldest daughter Evelina was shot in the video.

In 2013, Eva Polna took part in the parody show of Channel One - One to One. The singer performed in the images of Edita Piekha, Elena Vaenga, Cesaria Evora and even Valery Meladze and Bogdan Titomir.

In the same year, she presented on the Crocus City Hall stage not only a new program “All About Me”, but also a new collective - a string quartet, percussion, two backing vocalists and three musicians who play many instruments. No ballet, no special effects. Only she, the musicians and the screen in the back of the stage.

The composition "The whole world in my palm" and the clip of the same name for several months confidently held the first lines of the charts in 2013.