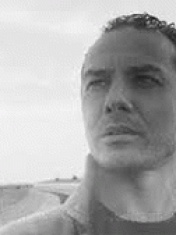 Alexey Poddubny was born on January 8, 1969 in Kiev. As a child, he learned to play the accordion, guitar, keyboard. In the army, he played the French horn, being a member of a brass band. Actually, he also began composing at a very young age.

Alexey was a member of many bands: Cool Before Drinking, Jolly Jail, The Plunge.

But in 2004 he creates a group himself, uniting Alexey German (keyboards, trumpet), Vladimir Pismenny (guitar), Sergey Goray (bass guitar) and Alexander Okremov (drums) under the pseudonym Django, which he invented while in the army.

The group quickly became popular. Django's songs immediately found a place on the radio, the group performs at the largest music festivals in Russia and Ukraine, Django is often invited to television. Their debut album "Wasn't Was" was released in spring 2005. And their next disc was a re-release of this disc with the inclusion of three new songs ("Walk-Thunderstorm", "Silver Road", "Goodbye, London") in 2007.

At the moment "When April Comes" is the last single released by the group.