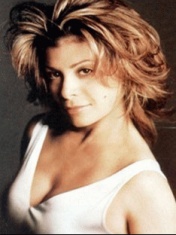 Paula Abdul began her career as a dancer and later as a choreographer. In this capacity, she worked with the Jacksons Five, and then "inherited" went to Janet Jackson (Janet Jackson). However, Paul was attracted by a singing career. Her good voice, appearance and choreographic training made her the ideal MTV heroine of the late eighties, and soon after Ms. Abdul recorded the first demo, she already had a contract with Virgin in her hands. Six consecutive singles, from "Straight Up" from their debut album "Forever Your Girl" to "The Promise Of A New Day" from the "Spellbound" disc, have climbed to the top of the US charts. The field was equally successful in pop ballads and dance music with elements of breakdancing. Video clips played an important role in popularizing the singer - just remember “Opposites Attract”, where live filming is combined with animation, and Paula is dancing with a cartoon cat.

In 1995, Paula's third and so far last album, entitled "Head Over Heels", was released. This time, the singer moved towards R&B, which she diluted with a Middle Eastern flavor (this theme is not at all alien to Paula - she herself is Jewish, and her father is from Syria). The album's circulation exceeded three million, but by the standards of previous discs, this result seemed unimportant. The singer spent the next 15 years on unsuccessful attempts to return to the business. She wrote several songs (one of which, "Spinning Around" was a hit performed by Kylie Minogue), participated in all sorts of reality shows, starred in commercials, fought for animal rights and even released a new single in 2009, but this is her success. did not bring.

The singer's personal life also evolved neither shaky nor roll. She got married several times, but all her marriages quickly fell apart. The last alliance with New York restaurateur JJ Torregiani broke up in the summer of 2008.

Paula Abdul has a Grammy Award for Best Video (Opposites Attract, 1991), four MTV Video Music Awards, the first of which, for the best choreography for Paul, she received in 1986 while still working with Janet Jackson, and four brought her the clip "Straight Up". Her achievements in choreography have earned Miss Abdul two Emmy Awards (1989, 1990) as well as the American Dance Awards (1989). In addition, Paula has four American Music Awards, two Billboard Music Video Awards, two People's Choice Awards and two Soul Train Music Awards.