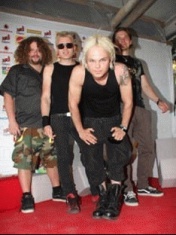 
Finland is famous not only for frost and representatives of the heavy industry: there are also bands in Finland that create in the synthetic genre of melodic rock, which is so popular among young people. And one of the main apologists for Finnish melodic rock is The Rasmus.

They started playing music at school, and played there, taking as a basis a weighted sound with catchy melodies. The Finnish branch of Warner Music became interested in the young group, and soon the whole of Finland knew about Rasmus, and their debut album received "gold" status.

After the first three discs, the group takes a three-year break, during which, firstly, they change the drummer, and, secondly, they give many concerts throughout Europe. Sometimes along with other Finnish rock monsters, HIM.

The beginning of the new century was marked by the new creative activity of The Rasmus - the "gothic" image of the musicians attracted new fans to them, and the group did not reduce its activity, releasing album after album, clip after clip, regularly participating in international music festivals, including in Russia ... In order not to leave the charts, the group is actively releasing a variety of collections, which are happily sold out by fans.

A new album by The Rasmus called "The Black Melody" is scheduled for 2010.